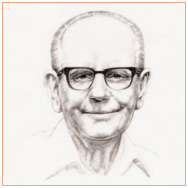 The Bowen Technique was pioneered by an Australian, Thomas Bowen (1916–1982). Bowen was born in Melbourne to English immigrants and worked the majority of his life as a manual labourer and carpenter like his father in the city of Geelong, Victoria. He had a natural gift for healing. During the day he worked in a cement works and treated people in the evenings, often working through to the early hours.

As his reputation spread people would queue at his clinic to see him. They took a number and waited to see him for his morning or afternoon clinic. Tom would see several clients at once using all the downstairs rooms, moving from one room to the next. This gave him time to see adjustments peoples’ bodies had made. He often saw up to 65 people a day but later left his books open to see more clients, which often showed he had seen over 100 people some days.

After he had finished is clinic he’d then make house calls, treating children for free.
When his own disabled granddaughter died at a young age he set up a free fortnightly clinic on Saturday mornings for disabled people.

On Saturday afternoons he’d drive around the local community and treat any injured football players. He assisted the Victoria Police by treating them any time day or night and was well known for his Sunday visits to Geelong prison to treat any injured inmates.

Tom worked with another renowned manual therapist, Ernie Saunders, who seems to have been a strong influence on Tom Bowen and with this exposure to consistent therapeutic approaches. Tom developed his own ‘seeing’ ability. It was often said that Tom could take a look at an individual and ‘see’ what was wrong and where the problem stemmed from. Often only needing to do a few simple moves, Tom moved away often to treat another person, allowing the body to rest for certain periods, before ‘seeing’ that the body had started to change. Once he recognised this changing taking place, his work was done and this client asked to return a week later or sometimes not at all.

What Tom could ‘see’ was not something that could be verbalised or classified in the strictest sense of diagnosis. He just knew where there was imbalance and had the ability to know when that imbalance was changing.

Talk was minimal during his clinics because Tom was profoundly deaf, he wore two hearing aids and towards the end of his life lost a leg possibly through diabetes.

Tom had no therapeutic back ground and he didn’t write his work down, but his results were astounding and he became well known for his body work.

He allowed a group of 6 men to observe his work over a period of time and it’s these men who have managed to spread Bowen’s work throughout the world. Tom Bowen said he’d shown them about 10% of what he knew and the rest they’d have to find out for themselves.

All these men were physical therapists, most of them having as osteopathic or chiropractic training and background. It was this formal training which gave them access to Tom’s clinic and helped them to compare methods but perhaps also restricted their ability to look beyond a rigid format. Five of the six men carried on their interpretation of Tom Bowen’s body work after his death. He was only 66 years old when he died.

Today there are several schools teaching Bowen, all based on Tom’s original principle teachings and all are highly regarded in the Medical, Remedial Therapy and Holistic Professions, especially in Australia.

If you have a condition that you think Bowen may help, or you'd like to know more, please send me the form below and I'll get back to you.

You can also download the Consultation Form PDF below which you should complete before your first visit.